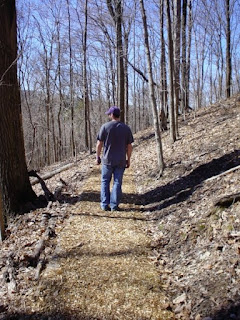 It has been ten years since Michael died.
When I was younger, adults would say to me, "time flies," and "the older you get, the faster it goes." I would shrug my shoulders and move onto something else, as only an arrogant, ignorant youth can.
But now I know.
Sometimes it feels as if I have lived an entire lifetime in the past decade. In some ways I have, I guess. I fell in love again. I got married on a big bridge overlooking an even bigger city. I have two little boys who call me "Mama."
I debated writing anything about this day. Mostly, I'm a pretty private person. There are new friends and acquaintances on this page who never knew Michael, who have no clue that I was married before. But I do feel like it is important to remember. Sometimes, I say his name out loud, just to remind myself that he existed. That he loved and was loved. That he drove around in an old yellow Chevy pickup, and he wrote songs about Washington wheat fields and green bananas, and me. That he felt more at home in the woods or on a mountain than any house he ever lived in. That he snorkled off the coast of Cuba, and ate pizza in Italy and walked cobbled streets in San Juan and danced under the moonlight in a castle on a hill in Lisbon.
That he lived.
This morning, I went to Radnor Lake. I climbed the same trail I've climbed for nearly 20 years, to the spot where he proposed to me.
His favorite color was purple. As I was climbing, a woman was coming down the path. She stopped me and asked, "have you seen the purple flowers?" I could barely get out the word, "no."
"They are just around the corner," she said. And off she went. I walked a little further, and just as she said, the hillside was alive with purple wildflowers.
A little further on, a weathered, old mountain man was coming down the path. Tied around his neck was a bright purple bandana. He smiled at me.
I got to the top, and sat at bench #37, the one with his name on it. The spot where he got down on one knee and asked me to marry him. Where he put the ring on the wrong finger because he was so nervous.
I sat there for awhile. I started to think that I would leave a little symbol on the bench for his sister, who I knew would be making the hike later that day. A heart, perhaps. As I thought this, a woman walked by. She turned and said to me, "have you seen the Heart Tree?"
"No," I said.
She said there is a Radnor tradition of people finding heart shaped rocks and placing them around a large tree near the bottom of the path.
"I try to find one every time I come here, but I never have any luck," she said. "Maybe you will find one."
I already knew I would.
I left my heart-shaped rock under that tree on the way down the path. For Michael. For me. For my incredible husband, Nate, and our beautiful children, Maddux and Everett.
Grief is messy. Sloppy. It does not stay within the lines. But I always remember what Nate said when we were dating: "It is part of your story. It is part of who you are. And I love who you are."
We remember you, Michael.
Posted by Lucy and Lloyd at 8:26 PM

Love is eternal. Thank you for your heart felt words. Each part of our journey helps to shape us and hopefully draw us closer to God.

Thank you Alison. I too remember. So many memories...reading this pealed the scab right off and opened me up. 10 years have went by so, so fast. I remember driving around Nashville with my big brother looking for the perfect ring for you. I remember growing up listening to his music until I fell asleep. Watching him, learning how to survive in the woods. How to fall trees, how to tie knots, how to build forts...how to love living. His purple Washington hat. His Fender Bronco our Dad got him when he was a teenager now lives with us and I find myself telling my two boys about their Uncle. Oh how I wish they would have had the chance to spend time with him. Until we visit next, take care Ali. Give Nate and the boys hugs from us. Thanks again for this writing. Love Shawn, Alison, Jet and Bode

Thank you for that. I loved making music with you guys.

Lucy and Lloyd
I am a former women's boutique owner, current singer/ songwriter, always a travel and fashion enthusiast and most importantly of all, a wife and new mom.